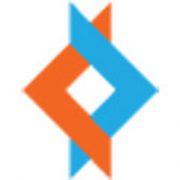 Complete results from our January The State of the American Traveler survey will be released in February.  As an early sneak peak, this post looks at domestic traveler sentiment and what may be early signs of a softening leisure market.

The new year has started with undertones of considerable uncertainty. While economic indicators had remained strong for much of the past year, talk of a slowdown now is in the wind. Sluggish growth, trade wars, higher interest rates, inverted yield curves, political gridlock and government shutdowns are all part of the conversation. We are currently experiencing what may be early signs of a pessimistic shift in the collective traveler psyche, as our latest sentiment tracking survey point toward a potential weakening of the domestic leisure travel market.

Every quarter, Destination Analysts ask a representative sample of 2,000 American leisure travelers about their travel plans for the upcoming year. In the most recent survey wave, the percent of travelers who said they expect to travel more in the next 12 months decreased. Only 33.4 percent said they would be taking more trips, compared to 37.0 percent one year earlier. As this data typically has a seasonal pattern, comparing past January waves is likely to be the best point of reference. The chart below shows how travel expectations have dipped significantly below performance levels seen in the past two years. 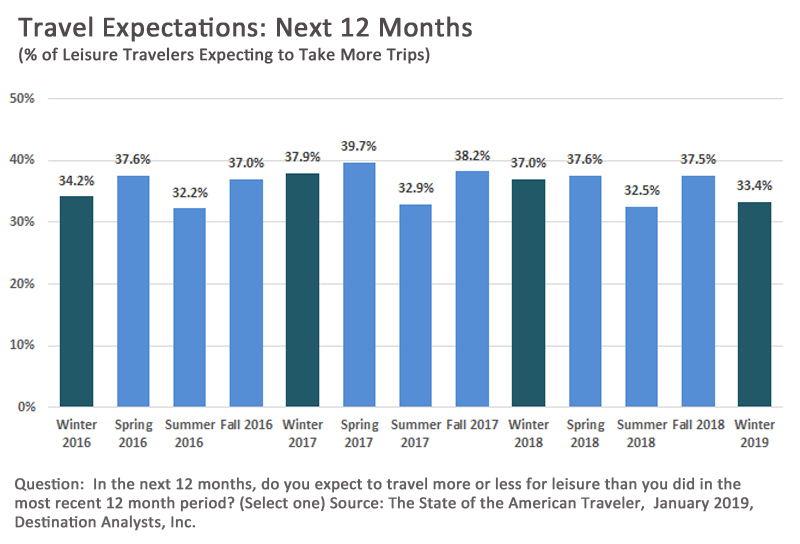 This moderate degree of pessimism seen in trip expectations also extends to future travel spending. When asked if they expect to spend more in the upcoming year on leisure travel, only 32.2 percent of American leisure travelers said that they would be beefing up their expenditures. This is down from 36.5 percent one year ago. 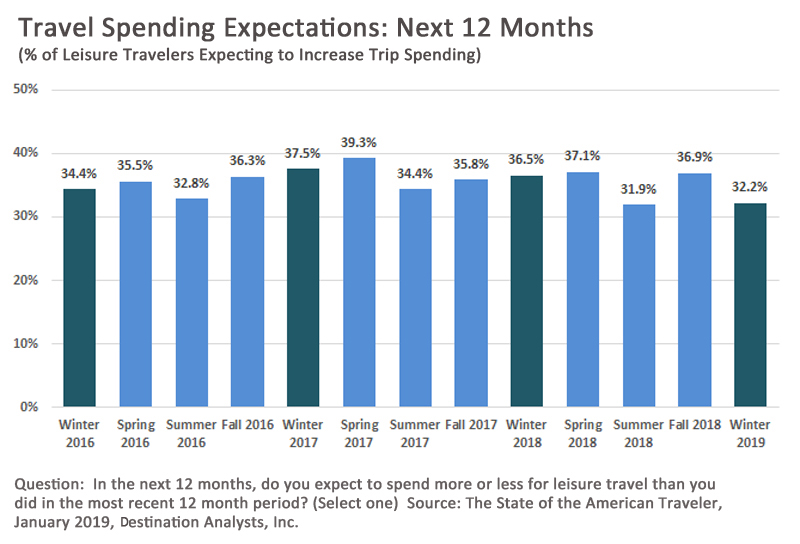 Travel volume and spending expectations have indeed softened, but potentially more unsettling is a drop in the general sentiment of how important leisure travel is as a budgetary item. Once a year, we ask how much priority travelers intend to place on leisure travel as they allocate their family budgets. At this time last year, nearly two-thirds of American leisure travelers (65.3%) said that leisure travel would be at least a “somewhat high priority.” This year, the corresponding figure has sharply dropped to 59.6 percent. The chart below shows the results from this year. 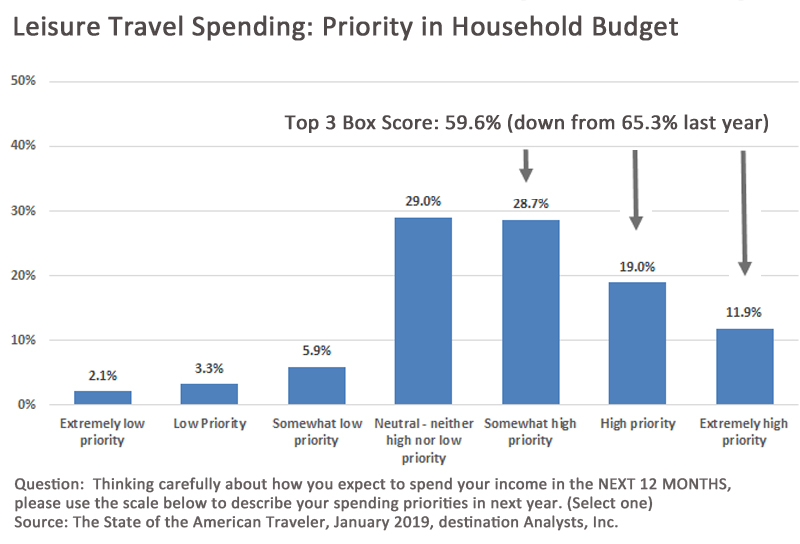 So, what’s the bottom line? It may be too early to tell. As we move further into 2019, we expect that the domestic leisure market will likely remain robust, however a significant downside potential exists. With uncertainty on so many fronts, we’ll hold our breath and hope for a positive outcome.