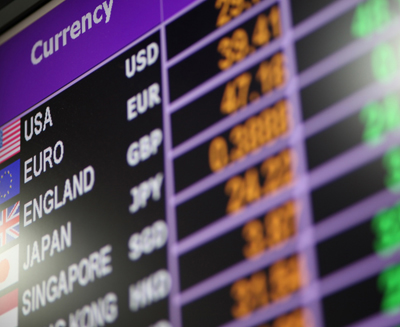 Global Tourism is booming. An estimated 1.3 billion persons traveled internationally in the past year, marking a robust 7 percent annual growth rate. However, it’s painfully clear that America hasn’t kept up. Our country has been losing market share, and with it, billions of dollars in tourism revenues. How much does the controversy swirling around Donald Trump contribute to this situation? Our The State of the International Traveler survey sheds some light on the topic. This year’s findings suggest that while the exchange rates and the cost of visiting the U.S. are the most important factors behind our declining market share, our politics matter too. The actions and policies of President Trump, the most visible symbol of our contentious political climate, have clearly played a role in America’s ongoing tourism challenge.

Five years ago, our company decided to launch a research effort to understand and track what international travelers think about America and its many diverse destinations. This survey, conducted at the start of each year, is called The State of the International Traveler. In it, we probe the minds of more than eleven thousand likely international travelers in America’s fourteen largest feeder markets. This study also gives us the opportunity to learn about current social issues, such as the controversial positions and policies of our 45th President. 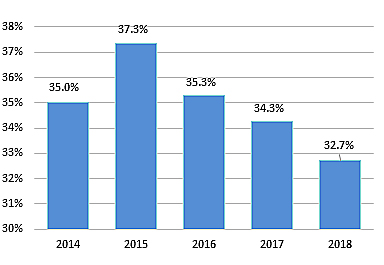 It’s clear that America is facing a challenge. We ask international travelers an unaided question to write in the top three countries they “most want to visit” in the upcoming year. Fortunately, we are still the world’s most popular destination, but our lead is narrowing. Since 2015, the proportion of international travelers reporting that the U.S. is one of their top destination has steadily declined, slipping by 12.4 percent.

Interestingly, the large overall proportion of travelers reporting they’re less likely to visit (35.4%) masks significant variation between countries. The charts below show that while there are problematic outcomes in much of the world, in India, Brazil and China, the situation is reversed. A larger share of travelers in these countries are “more likely” to visit than “less likely,” indicating President Trump may be a net positive in these markets.

The root cause of the decline in America’s market share is complicated, and politics are only one part of the full picture. The situation bcomes clearer when we look at reasons travelers have decided not to visit the United States. The chart below shows the proportion of all likely international travelers who say each reason keeps them from visiting the U.S. more often. 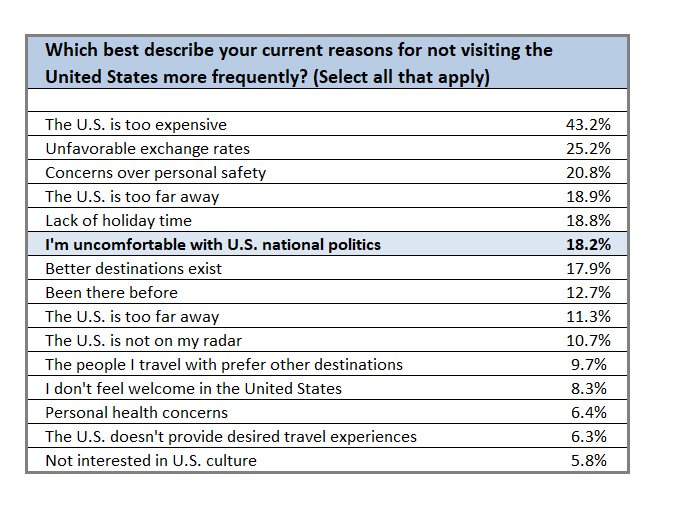 As expected, the reasons most commonly cited for skipping on a trip to America were financial. The most frequent answer given was that the U.S. is “too expensive,” followed by the closely-related “unfavorable exchange rates.” The strong dollar in recent years has made travel to America costly, and the situation is unlikely to change in the near future. Still, nearly one out of every five (18.2%) likely international travelers say that discomfort with our national politics is keeping them away. 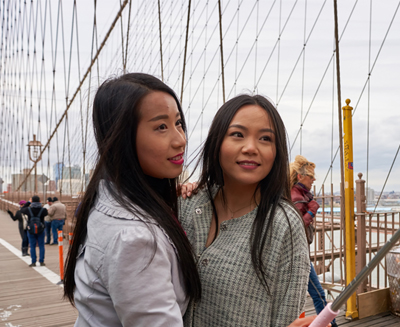 Among the many intractable challenges DMO marketers face, deciding which traveler types to go after is always top-of-mind.  One thing is clear though: our industry’s keen interest in the relatively nascent Chinese travel market is well-founded.  Not only is the volume of potential visitors from China staggering, Chinese visitors intend to do the one thing that is most desired by destinations–spend a lot of money in market.  Our 2018 The State of the International Traveler survey asked likely international travelers to report what they would expect to spend on a two-week vacation in the U.S.  The chart at the bottom of this post shows the average amount that travelers from each country say they would expect to spend overall, for shopping and for hotels.  Three fun facts about Chinese travelers jump out at us. 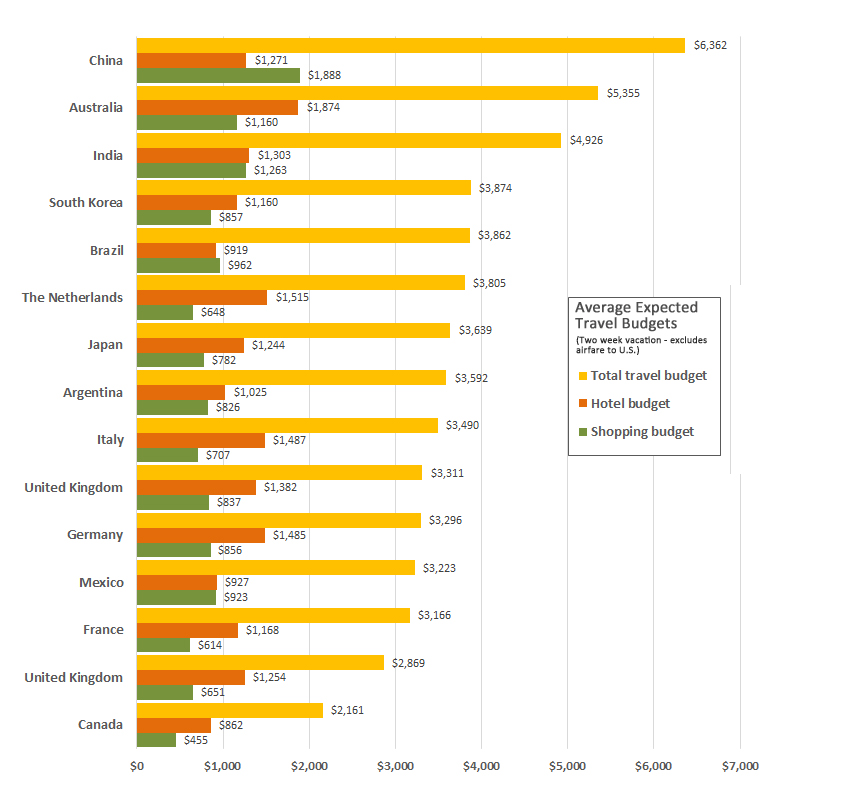 Source: The State of the International Traveler, 2018, Destination Analysts, Inc. A survey of over 800 likely international leisure travelers in each of 14 of America’s biggest feeder markets. 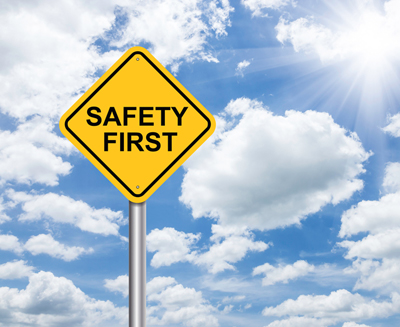 America may be the most high-profile of countries. What happens here can quickly find its way into the news around the world. Of course, no news travels more quickly than bad news, and America has recently had no shortage of such content. Mass shootings, wildfires, landslides, violent protests, hurricanes (and even now a volcanic eruption in Hawaii) have all punctuated the news cycle this year. Does the American proclivity to deliver sensational headlines keep international travelers away? It seems so, at least to a degree. One in five likely international travelers in America’s top feeder markets say personal safety concerns have kept them from visiting more.

In this most recent wave of our international tracking study, we added a question to determine major deterrents to visiting the United States. The top two reasons cited for not visiting the U.S. most often were financial in nature, “too expensive” and “unfavorable exchange rate.” Not too surprising with the strength of the US dollar nowadays. But the third most cited deterrent to visiting was “Concerns about my personal safety.”

Personal safety is a serious concern of many travelers. One-in-five (20.8%) travelers around the world say safety concerns have kept them from visiting the U.S.  Interestingly, when we look at the responses by country, we see that the Asian countries of China, South Korea and Japan are the most likely to report personal safety concerns while traveling in the United States.  Nearly half of Chinese travelers reported this concern, a disturbing result. 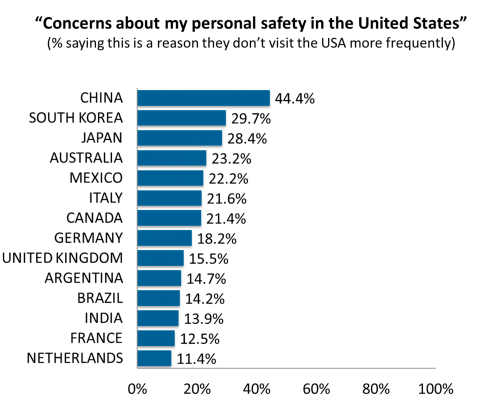 Travelers from China, Japan and South Korea were also the most likely to say that online video content would be influential in their travel planning and most importantly in the destination decision. This suggests that there is an opportunity, especially for destinations who are focused on moving the needle on visitation from countries like China, to create more online video content about how safe and welcoming it is here in the United States. Some destinations are already capitalizing on this opportunity. Take the “Everyone is Welcome” video campaign from Discover LA. The Los Angeles Tourism & Convention Board reported a substantial increase in visitation from China last year, setting them apart from the downward trend in visitor interest currently seen by the nation as a whole.  You can read more about it here.

Marketing Insight:  Online video content featuring welcoming, safe communities is a win on two counts: it addresses a top-of-mind travel concern, and delivers the message in a popular, preferred channel.

How Well Do You Know International Travelers?

--This Quiz is hard, but give it your best shot!-- 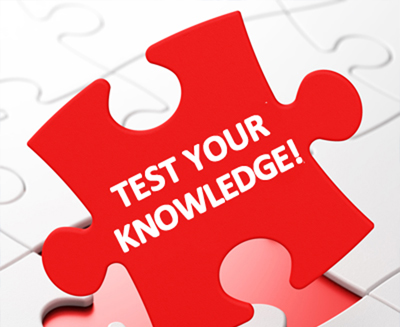