Earlier this year, our blog examined a variety of natural disasters through which our clients had unfortunately been suffering. (Read more here)  Of course, we hoped that was the end of it. Our friends in the industry would see no more trouble; or as the great Willie Nelson said, “nothing but blues skies from now on.” Alas, those dreams were shattered this summer when a severe and unusually persistent Red Tide ravaged the south Florida tourism industry.

If you’re not familiar with what a Red Tide is, it’s a real mess. Red Tide is a dangerous accumulation of naturally-occurring microscopic alga that has been documented along Florida’s Gulf Coast since the 1840’s and occurs nearly every year. It can harm sea life as well as cause respiratory inflammation and unpleasant burning skin reactions in humans. A combination that is not good for tourism. This year, an unusually persistent Red Tide — the longest in the area since 2006 — happened along the Florida Gulf Coast. In coastal tourism communities, the impact to the local tourism economy was severe.

If there is any good news in the situation, it’s that only half (49.1%) of American leisure travelers had actually heard of the Red Tide situation prior to taking our most recent The State of the American Traveler survey. (This may be one of the few cases where a destination marketer wants its customers to be in the dark, unfamiliar with its product.) Still, amongst American leisure travelers, the event has had a significant impact on desires to visit.

When asked how the Red Tide would impact their travels in the next 12 months, 40.3 percent said it would make them less likely to visit the Florida Gulf Coast. While a certain percentage seem interested in experiencing this unusual event, they are outnumbered 5 to 1 by those who say they are less likely to visit. 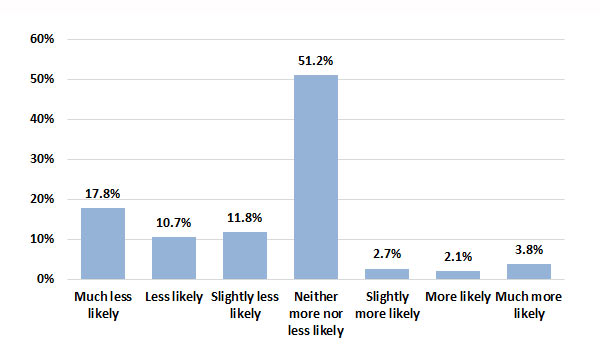 The impression left by this disaster with travelers isn’t good. While it is unclear how this will actually impact travel behavior, let’s hope that people have short memories and that the upcoming year will be a banner one for Florida tourism. As a matter of fact, as we move into the New Year, let’s hope for a 2019 free of the disasters that have recently destroyed the great work being done by our destination marketing community.

Americans love the great outdoors. Two out of three say experiencing nature (away from urban areas) is usually an important part of their leisure trips. Furthermore, over 40 percent say the idea of taking leisure trips focused primarily on being outdoors and experiencing nature is appealing. With this in mind, we look at which destinations are set to capitalize on this passion in 2019.

No doubt about it—the winter days are upon us. Time to slow down, cozy up and dream of the tropics. What’s that? Humidity’s not for you? Right then—maybe the slopes. Saguaro and desert blooms? Mangroves and mossy trees? Amber waves of grain? Lucky for us, our beautiful country has it all.

If you’re like most Americans, you probably have a pretty good idea of where you’ll go next to soak up the great outdoors. (Forest bathing in the Redwoods, anyone?) But if you’re looking for further inspiration, we’ve got you covered. In our latest The State of the American Traveler survey we posed the following scenario to a nationally-representative sample of leisure travelers. “Imagine a friend wants to take a leisure trip focused primarily on being outdoors and experiencing nature. This friend comes to you for advice and asks where to he or she should go. Which two states would you be most likely to recommend for being outdoors and experiencing nature?”

Here’s a list of the top states. Where would you recommend your friends go in 2019? Will you take your own advice? 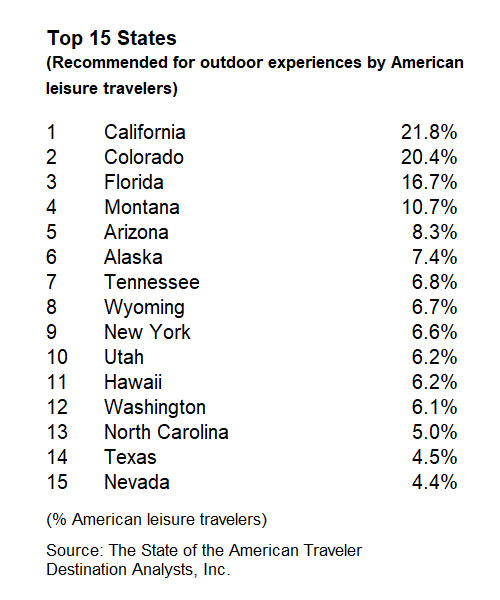 Wherever your greener pastures lie, take advantage of these extra-long winter nights to conjure the outdoor odyssey of your dreams.