Blog - Latest News
You are here: Home / Insights & Updates / The State of the American Traveler / The Impact of Recent Disasters on Destinations

Natural and man-made disasters have been known to wreak havoc on a destination’s reputation and visitor volume. But how much do disasters truly affect the interest of travelers in visiting a destination, and how long do these effects linger? We asked American leisure travelers for an answer, and found that people may not hold onto these negative associations for as long as we had thought.

They say that life comes at you fast, and in the last several months, several of our friends in the industry have experienced this firsthand. Unexpected natural or human-caused disasters have touched their destinations, consequently impacting their brands and their ability to attract visitors. From wine-country wildfires to political riots on the East coast, a series of disasters have struck the destinations represented by several of our clients. Beyond the immediate difficulties, concerns and questions about their longer-term effects are being raised.

To help shed some light on the issue, we added a few pertinent questions to our most recent The State of the American Traveler surveys. This blog post shares some topline findings, and suggests that travelers may not hold onto these issues as long as we think.

The first piece of good news is that awareness of these disasters is far from universal. In fact, when we began looking into this last October, only about one third of American leisure travelers said they were even aware that the California coast at Big Sur had been closed to visitors due to crippling winter landslides. Fewer than half of travelers (48.8%) knew that the State of Oregon had been hamstrung by crippling wildfires. Even in these crazy times, politics may not be on the mind of as many of us as one might think. Only two-thirds of American leisure travelers were aware that the City of Charlottesville, Virginia had been the scene of dramatic political unrest late last summer. Amazingly, one in ten of us was not aware of the Las Vegas mass shooting in October.

The chart below shows recall rates for each of several disasters happening last year, and fortunately, it appears our memories for these things are not long. For each of the disasters studied, in just three short months, the percent of travelers who report having heard about the event dropped significantly. 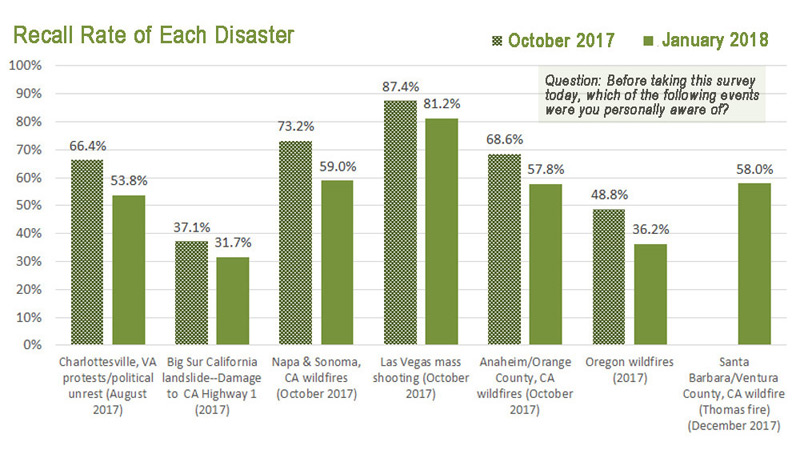 There’s even more good news in the data. While the initial impact of a disaster on traveler sentiment may be significant, these negative feeling also appear to fade quickly. For example, in October when the fires had just ended, 37.1 percent of travelers said the Napa/Sonoma fires made them less interested in visiting the destination in the next twelve months, but by January this figure had fallen to only 18.4 percent. Similar results were seen for the other disasters. 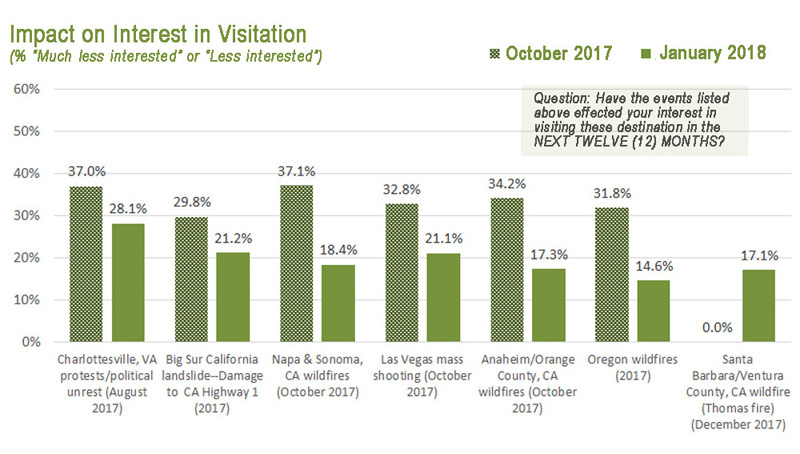 So it appears that uncomfortable feelings about a place generated by calamities evaporate fairly quickly. Damage to the tourism sector caused by these events doesn’t need to be long-lasting. Travelers’ memories are short, and people intuitively understand that time heals wounds caused to a place. Life does indeed come at us fast, but disaster-related problem for destinations can also quickly fade in the rearview mirror.

Data source: Destination Analysts, Inc. The State of the American Traveler, October 2017 and January, 2018. Note: The Thomas Fire was added to the survey in January. No data is available for October, 2017. 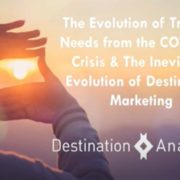 The Evolution of Traveler Needs and Destination Marketing

Is Influencer Marketing Worth Your Time?