Innovation is our favorite thing here at Destination Analysts.  We’ve been on the cutting edge of destination research for two decades now, and still love nothing more than moving the needle forward.  Our latest innovation is combining the Voice of the Consumer (i.e., website user survey responses) with website analytics data.  The results are impressive and extremely valuable.  Imagine being able to see what different user types (leisure travelers, meeting planners, the press, etc.) are actually doing on your website.  Or even better, being able to develop your content strategies based on the actual behaviors of travelers at different points in the travel planning funnel.  Do potential visitors who have already decided to visit differ from those simply considering your destination?  If they do (and yeah, they do) your marketing effectiveness will depend on understanding these differences.

Our recent webinar explores this new approach to DMO website research.  We invite to take a little time today and watch.  Just click the image below. 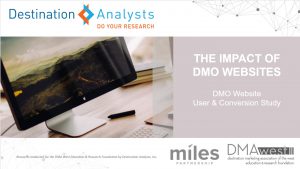 If you’re interested in harnessing this technique to take your online marketing to a new level, contact us today.

Did you know that, on average, 3.4 percent of DMO website users are converted by these sites from an undecided potential traveler to an actual visitor? Our recent landmark study of 13 Western U.S. DMO websites revealed that while this conversion factor may seem modest, the resulting economic impact to the DMOs’ communities is very significant. In fact, for every real, new website user of the 13 DMO websites we studied, $37 in new visitor spending was injected into their localities. Read on to learn more!

While the modern DMO must tackle a dizzying array of online marketing objectives, inspiring undecided website users to visit the destination is quite possibly their most important online objective. The reason for this is straightforward. Generating so-called “incremental visits” is the single greatest source of return on investment created by these organizations’ digital expenditures. In partnership with the DMA West Education & Research Foundation, our team recently completed a fascinating comprehensive study of DMO websites, which benchmarks and explains the reach and impact of these websites.

An executive summary of this exciting research approach pioneered by Destination Analysts is now available. This year-long project analyzed visitor traffic to the websites of 13 DMOs in the Western United States. A primary objective of this project was to estimate the direct visitor spending these websites produce for their respective communities. Essentially, we sought to estimate the total amount of direct visitor spending in-market that was generated by and attributable to the DMO website. Alternatively, it’s the amount of visitor spending in the destination that would not have occurred in the absence of the website.

The results are compelling. There is no doubt that DMO websites are invaluable marketing assets and significant generators of economic impact for their communities. Following are the key economic impact metrics that emerged from the study. These findings are based on 8,845,291 real, new website users of all 13 participating DMO websites between January 1, 2016 and January 1, 2017. 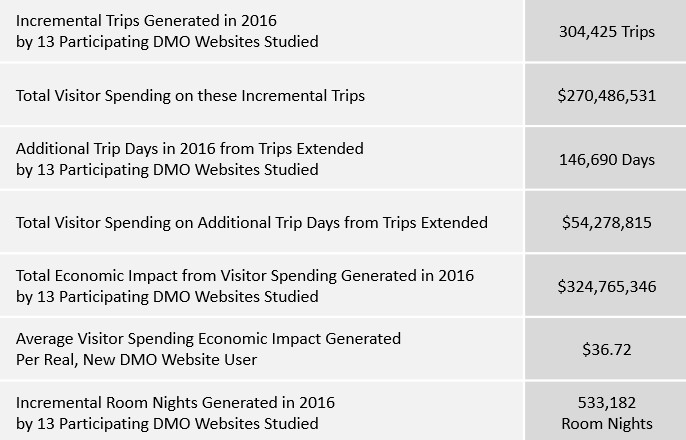 Of course, the results of individual DMO websites varied greatly—showing that there is no substitute for conducting your own research. Still, the overall story is compelling. The DMO’s influence on local economic performance through inspiring travel to their destinations is inarguably significant.

Click here to read the complete executive summary of findings.