Blog - Latest News
You are here: Home / Insights & Updates / The State of the American Traveler / An Emerging Threat in Travel Decisions

Climate change is on the minds of many American leisure travelers. In fact, fully half (50%) say that they expect it to impact their travels in one way or another at some point in the next five years.

Climate change has emerged as an impactor of travel decisions among half of American travelers. A recent edition of our The State of the American Traveler survey asked travelers if they expect that climate change will impact their travel plans at some point in the next five years. We found out that its on the minds of many, and not only because of volatile temperature changes. Travelers are thinking about long-term consequences too. 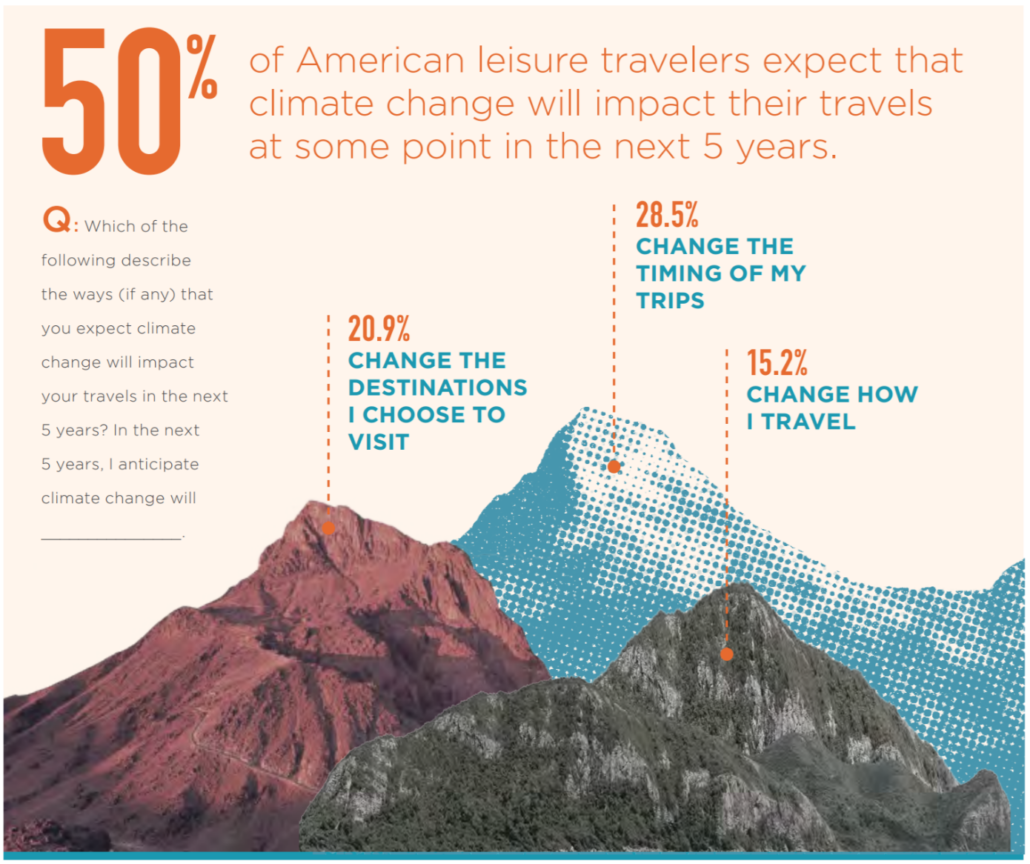 “If sea levels rise, I’d assume some shore destinations and islands would be affected. Already I was unable to go to a destination of choice as it was decimated by a very strong hurricane a couple of years ago.”

Many American travelers responded that natural disasters would completely deter them from planning a trip to that destination. Not only would a natural disaster force them to cancel their plans, but if the area has prior history of hurricanes, typhoons, or earthquakes, it makes the traveler significantly less inclined to plan a trip. Travelers are already experiencing the effects of natural disasters on their travel decisions: one traveler reported that the recent mudslides and wildfires in California makes them significantly less inclined to plan a trip, even though they have frequented the state in past years.

Destruction of coastal destinations is also a major concern among travelers. Fear of sea level rise make travelers feel a sense of urgency to plan a trip before cities are submerged. Others expressed sadness that once thriving national and state parks, their preferred destination, are being destroyed. One traveler expressed anger that their once beloved snowy destinations are “being robbed of their beauty.”

“I need to make sure my family and I are safe when we travel.”

Some travelers had specific examples of how climate change is pervading their personal lives and travel decisions. A common sentiment among travelers is an awareness that they are already changing the time of year they plan to travel based on weather patterns. One respondent explained that their family lives in a place they feel will be severely affected by glacier melting, and therefore they might have to stop traveling there soon. Another respondent reported that although they used to travel to Los Angeles frequently, the air quality has gotten so poor they can no longer. A third wrote that as temperatures increase in their home in Texas, they will soon be searching for cooler destinations and traveling more frequently during peak summer months. Plenty of people responded that the safety of themselves and their family while travelling is an increasing concern as global warming becomes more threatening.

“Climate change will make me more aware of my impact on my surroundings while traveling and try to minimize my effect on these destinations by showing respect for the environment to preserve it for future generations.”

Climate change isn’t just affecting where Americans travel, but how they travel. Many respondents acknowledge that the cost to travel will increase as certain destinations are more highly demanded. There is desire among respondents to be more thoughtful about their own environmental footprint by, for example, changing their mode of transportation to a train or boat. Others reported that they would be more attracted to sustainable regions in the coming years.

American travelers evidently think that climate change is a substantial factor to consider when planning a trip. In five years, will climate change be the number one influencer of travel decisions?

The Future of Travel-Planning Apps

Getting the Love You Want From Meeting Planners